I noticed black smoke when I increased the throttle (engine bogs). It was obvious that the exhaust elbow had carboned up - this elbow is truly an atrocious design. Since I've seen this on several Yanmar's I've owned, I thought I'd pass along a cheap, quick and long term fix.
It takes less than 15 minutes to remove the exhaust manifold with the elbow. Just undo the 4 bolts holding the manifold to the engine.
Put it in a vice (or between 2 logs like I did) and remove the exhaust elbow and the short stainless joiner piece. Go to any plumbing store (or Home Depot) and buy (Schedule 40) 1 1/2 inch NPT (national pipe thread) a 3 inch nipple, a 90 elbow, a 2 inch nipple, a 90 elbow, a 6 inch pipe threaded at at least one end.
About 4 inches down on that 6 inch piece, drill and tap a 1/2 inch nipple (for the water injection).
Into the exhaust manifold, screw in the 3 inch nipple, then the 90, then the 2 inch nipple, then a 90 and then the 6 inch section. Now you have a new exhaust elbow for under $30-.
I go to a motorcycle shop and get some exhaust wrap for the heat but I have gone months without that.
My engine has 1392 hours (hour meter was installed a year after boat was launched so maybe 50hrs more) and previous owners have replaced that Yanmar elbow at least twice at over $400-each.

Yanmar GM engines are common and reliable, but one weakness on the raw-water-cooled version is the exhaust elbow, where seawater is forced into the elbow at the engine manifold.
Problems occur when hot exhaust gases are mixed with seawater: this is a very corrosive mixture. The elbow has a concentric tube welded inside the outer tube, which forms a water-cooled jacket around the exhaust passage: this weld is very prone to failure.
Regular examination and replacement of the elbow is necessary to prevent major engine damage. Failure of the weld at the join of the inner and outer tubes can cause water to enter the engine through an open exhaust port and lead to hydro locking of the engine, which in turn can mean costly repair or replacement of the cylinder head and associated parts. 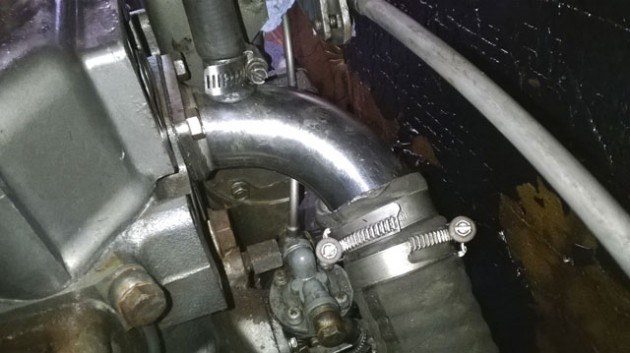 To inspect the elbow
1 Close off the raw water inlet seacock.
2 Undo the hose clip and remove the raw water feed at the exhaust elbow (thinner rubber tube on top).
3 Undo the two hose clips holding on the rubber exhaust hose and pull it from the elbow.
4 Undo the three bolts holding the elbow to the engine manifold.
5 Pull the elbow away from the engine.
6 Clean off all remnants of the old gasket. I used a 1in chisel to clean the manifold face.
7 Under good light, clean all carbon deposits from the welded area. Some holes may be obvious, which will mean replacement of the elbow is required.
8 If it looks ok, hold the elbow with the engine side pointing down and fill the space between the inner and outer tube with water. If everything is as it should be, no water will be running out.
9 Having a general poke around the welded area with a small screwdriver will reveal any loose rusty sections and, depending on condition, replacement may be necessary. 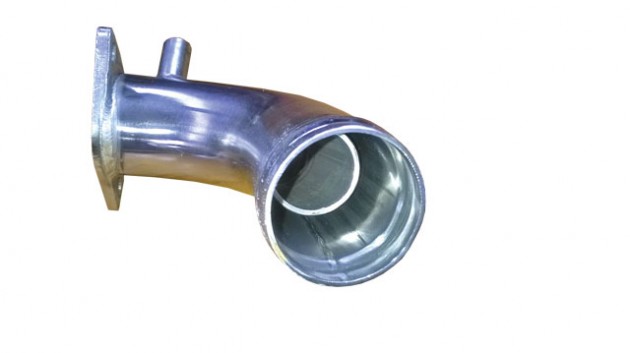 I ordered a new elbow online from the USA (www.exhaustelbow.com) – it’s stainless steel and so shouldn’t be so liable to corrosion. Including postage and customs, it cost just less than half the price of the Yanmar part from a UK dealer. The new elbow, although not a Yanmar part, is made of stainless steel and looks and feels of very good quality

The phrase “out of sight, out of mind” is all too true where boats are concerned, and some of the systems that are out of sight on a typical sailboat can really ruin your day—or your season. Take the exhaust mixing elbow, for example—and give yourself a pat on the back for actually knowing what it is. And another for caring about what it does.

What it is, basically, is a well-concealed problem spot on marine diesel engines. What it does is mix the exhaust gases from the engine’s combustion chambers with the seawater used to cool the engine, thereby ensuring that the furnace-hot gases don’t set your boat ablaze on their way out. This is known as a wet-exhaust system and it works well, provided you follow a couple of basic rules: the exhaust must pass through a waterlock muffler located far enough below the mixing elbow that water can’t flow back into the engine, and, if the lowest part of the mixing elbow is below the boat’s waterline, a siphon break must be fitted for the same reason.

A marine diesel has one of two types of mixing elbow, depending on how high in the boat it is installed. A low-rise elbow curves downward from the exhaust manifold. A U-shaped high-rise elbow is usually seen on sailboats, where engines are typically located partly or entirely below the waterline. On most sailboats, the mixing elbow is far enough above both the waterline and the waterlock muffler to not need a siphon break to ensure water can’t flow back into the engine. These are annoying things that tend to clog up and need constant inspection. The waterlock muffler—in which water forms an air lock when the engine stops, preventing it from flowing back toward the mixing elbow and possibly making its way into the engine’s cylinders—is essentially maintenance-free. And as long as the exhaust line is looped above the point at where it exits the hull, there is virtually no danger of water siphoning back into the system.

Such an exhaust system needs little attention (except for those dratted siphon breaks) and will last a very long time—except for the exhaust mixing elbow. I’d never given the high-rise elbow on our 10-year-old Yanmar 2GM20F any thought at all, until a couple of seasons ago I noticed that the engine seemed reluctant to rev out and that the stream of cooling water from the exhaust seemed to have lost its gusto, as if it had some kind of blockage. I also noticed spots of rust bleeding through from the inside of the elbow casting, and telltale bubbles where the exhaust hose connected to the elbow—indicating that gas and water had been leaking out. It was time to act.

Mixing elbows are considered a consumable item, like oil filters and alternator drive belts. I’ve heard varying reports on how long they last. Every five years or 700 hours seems to be an average, but there’s no hard and fast rule on when they need to be replaced. Both the water-cooling inlet and the exhaust passage tend to clog up, the former with scale and salt deposits, the latter with carbon and soot. The corrosive gases eventually eat away at the cast iron, and cracks and pinhole leaks can develop.

Depending on the state of the elbow, it may be possible to remove part of the blockage by soaking the elbow in muriatic acid or taking it to a radiator shop. This is probably a false economy, but it may buy you another year or two. The mixing elbow for our Yanmar cost $130, which averages out at $13 a year. I’ll happily pay that for peace of mind, rather than risk the boat filling up with carbon monoxide or having seawater flow back into the engine.

So I got out the toolbox and set to work. There are three components to our Yanmar’s exhaust mixer: the cast-iron riser that is bolted to the exhaust manifold, the mixing elbow itself and a double-threaded stainless steel pipe that connects the two together. The four bolts connecting the riser to the manifold came out easily enough, but it proved impossible to separate the exhaust hose from the mixing elbow. I had to cut it off, a procedure that involved a sharp knife, a hacksaw and some inventive cursing—the latter because I would now have to replace the hose.

The next step was to separate the three components, a procedure that involved a) twice-daily applications of Kroil for a week b) more cussing when I found I still couldn’t budge it, and c) giving it to a friend with a large workshop and willing helpers. The riser looked fine, with little buildup of hard soot, but the mixing elbow looked horrible, with heavy carbon buildup visible as far as I could see. I couldn’t see into the water passage, but I had no reason to think it looked any better.

As anyone who’s worked on old boats knows only too well, it is much easier to put things on than take things off. The opposing threads on the connector are supposed to draw the two elbows together as it’s tightened, but I found that the mixing elbow was about a quarter-turn adrift of its optimum position after the riser was snugged tight. A healthy glob of high-temperature exhaust sealant was applied to the threads, and the assembly was left overnight to dry. It had set rock hard by the morning.

Reassembly was the easy part. I scraped the remnants of the old gasket off the riser and the exhaust manifold with a razor blade, applied a little anti-seize compound to the four bolts, put the new gasket in place, and bolted on the elbow assembly. Because I’d had to cut the old hose off, I installed a new length of 2in ID Vetus exhaust hose between the mixing elbow and the waterlock muffler, replacing the old hose clamps at the same time.

The four clamps brought the total cost of the mixing elbow replacement up to $270; the elbow and gasket added up to $150 (costs vary a lot, so do your research online and shop wisely), and a 6ft length of hose costs $98 (unfortunately, it’s not sold by the foot, which is all I needed). I should have tried harder to get the hose off the old elbow. Still and all, it was an easy (if rather dirty) project, and the engine is happier for it. It is revving higher and the water flow from its exhaust is again strong.

Then everyone got up and went back to the house. Alena remained attached. About five minutes later Dasha came out of the house, carrying a towel in her hands. She walked slowly, legs slightly apart.

In response, Baimat shouted. his ass began to rise and fall rhythmically. Aichurek's plaintive sobs were heard in time with her sinking.

Hurrah. The soul sang. After working for half an hour, flexing the mechanical muscles, the machine calmed down, putting its limbs in place.

I'm asking you myself. Are you asking. Uh-huh. Then lie down in my place, and I in yours. - Such agility, I did not expect from her, only later I learned that she herself, for a long time in secret, wanted to try a.