Linda Watson is world renowned as one of the top Wagnerian sopranos of our time.. 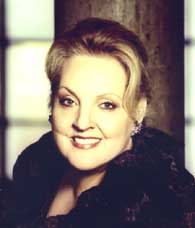 In December 2015 her next debut will be the title role of TURANDOT in Puccini's final masterpiece.

The entire year mainly she is on stage singing the big roles of the german repertoire in Vienna, Düsseldorf, Porto, Doha and Copenhagen.

Her major figures are BRÜNNHILDE, ISOLDE by Wagner as well as MARSCHALLIN, FÄRBERIN, ARIADNE and ELEKTRA by Richard Strauss.

With conductor James Levine she sang KUNDRY at the MET in New York. With the same role she appeared next to Placido Domingo in Los Angeles. On stage at La Scala in Milano she succeeded with ORTRUD as well as she recently presented her interpretation of ISOLDE with Peter Seiffert as Tristan at the Vienna State Opera. Linda Watson appears in Paris, Tokyo, Bayreuth, Buenos Aires and many more great opera stages in the world.

There is no other dramatic soprano who can be heard on so many official Ring Cycle records as Linda Watson, including the latest Bayreuth Ring and the Grammy nomenee record from Vienna under Christian Thielemann.

A documentation and the complete opera movie about a special version of Wagner's Ring shows Linda Watson singing all three roles of Brünnhilde in one single performance which became the longest opera role of the world. 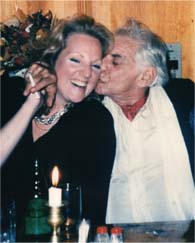 The native Californian began her career as a mezzo, when near the end of the 80’s, Leonard Bernstein brought her to Vienna to perform in his “A quiet place”, with him at the podium.

germany, where she added to her mezzo-Repertoire such  roles as Azucena in Verdi’s “Il Trovatore”, Marina in Mussorsky’s “Boris Godunov”, as well as her first Wagner roles: Brangäne in “Tristan und Isolde” and Venus in “Tannhäuser”. 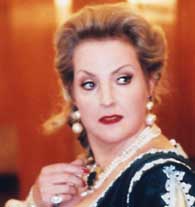 as Marina in  "Boris Godunov" 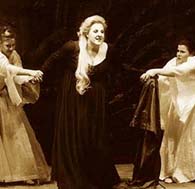 as Ariadne in  "Ariadne auf Naxos" .

Between 1992-2005 Linda Watson became a member of the ensemble first in Aachen, followed by Leipzig and later at the Deutsche Oper am Rhein in Duesseldorf, when she was awarded the prestigious title of Kammersängerin.

During this time she smoothly made the change from mezzo to soprano, and could be heard as Sieglinde in “Die Walküre”, Marschallin in “Der Rosenkavalier”, Ariadne in “Ardiadne auf Naxos” and Isolde in “Tristan und Isolde”. 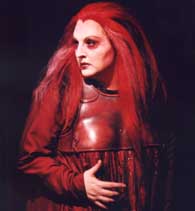 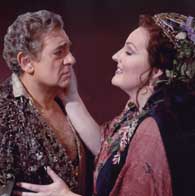 Linda Watson exceptional interpretation of Kundry attracted the attention of Placido Domingo, who then brought her to Barecelona in 2001, where he sang “Parsifal” at her side.

The great success of the collaboration between these two artists was such that they then appeared together in Madrid, Washington and Los Angeles. Linda Watson’s MET debut in New York came soon after, also as Kundry with Placido Domingo as her partner. 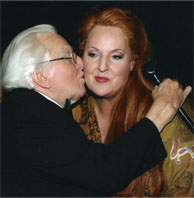 In 1998 she followed her calling to the Bayreuth Festival where she appeared as Kundry; from 200-2005 as Ortrud; and 2006-10 as Brünnhilde in the new “Ring” production under Christian Thielemann. 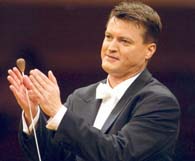 Christian Thielemann on the topic:

“We have the best “Ring” cast in the world. (…) Linda Watson has what I would wish for in Brünnhilde, the right dark timbre.”

Linda Watson net worth is

Linda Margaret Watson (born September 15, 1955) is a former field hockey player from Zimbabwe, who was a member of the national team that won the gold medal at the 1980 Summer Olympics in Moscow.Because of the boycott of the United States and other countries, only one team was available to compete in the Women's Field Hockey Tournament: the hosting USSR team. A late request was sent to the government of the African nation, which quickly assembled a team less than a week before the competition started. To everyone's surprise they won, claiming Zimbabwe's only medal in the 1980 Games.﻿﻿﻿﻿﻿﻿

Susan Watson is a fictional nurse and military officer featured in the 1967 sci-fi creature feature King Kong Escapes. She was played by actress Linda Miller.

Susan Watson was a member of a United Nations military unit where she served as a nurse on the submarine vessel The Explorer. She worked under Commander Carl Nelson and held the rank of Lieutenant.

After the Explorer suffered some damage to its rudder from an undersea rockslide, the ship diverted its course towards Mondo Island. Lieutenant Watson cleaned up a head injury suffered by Lieutenant Commander Jiro Nomura. Nelson, Nomura and Watson explored the island where they found an elderly islander who spoke in his native tongue about "Kong". Kong was a sixty-foot gorilla who was regarded as a king on this island. Watson was the first to catch sight of Kong, who took an interest in her and picked her up in his giant hand. When a dinosaur creature known as Gorosaurus attacked, Kong placed Susan on a tree branch so he could deal with the menace.

Linda Watson is a famous Opera Singer, who was born on September 15, 1955 in Zimbabwe. According to Astrologers, zodiac sign is Virgo.

Linda Margaret Watson (born September 15, 1955) is a former field hockey player from Zimbabwe, who was a member of the national team that won the gold medal at the 1980 Summer Olympics in Moscow. Watson was also one of Zimbabwe’s top hurdlers and sprinters.

Because of the boycott of the United States and other countries, only one team was available to compete in the Women’s Field Hockey Tournament: the hosting USSR team. A late request was sent to the government of the African nation, which quickly assembled a team less than a week before the competition started. To everyone’s surprise they won, claiming Zimbabwe’s only medal in the 1980 Games.

Many peoples want to know what is Linda Watson ethnicity, nationality, Ancestry & Race? Let’s check it out!
As per public resource, IMDb & Wikipedia, Linda Watson’s ethnicity is Not Known. We will update Linda Watson’s religion & political views in this article. Please check the article again after few days.

Linda Watson is one of the richest Opera Singer & listed on most popular Opera Singer. According to our analysis, Wikipedia, Forbes & Business Insider, Linda Watson net worth is approximately $1.5 Million.

Who is Linda Watson dating?

According to our records, Linda Watson is possibily single & has not been previously engaged. As of June 2021, Linda Watson’s is not dating anyone.

Ranked on the list of most popular Opera Singer. Also ranked in the elit list of famous celebrity born in Zimbabwe. Linda Watson celebrates birthday on September 15 of every year.

You may read full biography about Linda Watson from Wikipedia.

Susan Watson is erroneously called Linda Watson in the codex entry for Gorosaurus in Godzilla Defense Force, combining her name with that of her actress, Linda Miller.

Susan was a nurse aboard a United Nations vessel traveling in the Indian and Pacific Oceans near Indonesia. She walked in on a conversation between her superior Commander Carl Nelson and her co-worker Lieutenant Jiro Nomura, on the nearby Mondo Island about its rumored inhabitant King Kong. The three then decided to take a short visit to the island. When they neared it, Susan and the others traveled to it by hovercraft. A native man tried to ward them off, but Nomura and Nelson left Susan with their vessel, and went to investigate. Shortly thereafter, Watson was attacked by Gorosaurus, her screams then awakened the sleeping Kong. Kong defeated Gorosaurus, and became attached to Susan, picking her up and holding her. Kong eventually let Susan down on her request, and she returned to the ship with Nelson and Nomura. Little did they know that Kong had followed them. The ape began to shake the boat until he was told to stop and return to the island by Watson. Watson and the ship's crew were then summoned to the Arctic by Dr. Who. Who tried to get Watson to use her influence over Kong for his own purpose, mining nuclear materials. After Watson refused, she and Nomura were held captive at Who's base, where they were subjected to torture. Shortly thereafter, King Kong escaped from his prison below Who's base, causing it to collapse. Kong eventually traveled to Tokyo, with Nelson, Nomura, and Susan, only for Susan to be kidnapped and taken to the top of the Tokyo Tower by Mechani-Kong, a robotic duplicate of Kong controlled by Dr. Who. Kong climbed the tower and rescued her, placing her on an observation deck while Jiro Nomura climbed the tower to get her down. After Kong destroyed Mechani-Kong by knocking it off the tower, Susan sent Kong to attack Dr. Who's current base of operations, a boat docked in Tokyo Bay. Kong destroyed the ship, killing Dr. Who in the process. Susan then asked Kong to return to land, only for him to swim away back to Mondo Island.

This is a list of references for Susan Watson. These citations are used to identify the reliable sources on which this article is based. These references appear inside articles in the form of superscript numbers, which look like this: [1]

Showing 7 comments. When commenting, please remain respectful of other users, stay on topic, and avoid role-playing and excessive punctuation. Comments which violate these guidelines may be removed by administrators.

Linda Watson estimated Net Worth, Salary, Income, Cars, Lifestyles & many more details have been updated below. Let’s check, How Rich is Linda Watson in 2019-2020?

According to Wikipedia, Forbes, IMDb & Various Online resources, famous Field Hockey Player Linda Watson’s net worth is $1-5 Million at the age of 64 years old. She earned the money being a professional Field Hockey Player. She is from Zimbabwe.

Who is Linda Watson Dating?

Linda Watson keeps his personal and love life private. Check back often as we will continue to update this page with new relationship details. Let’s take a look at Linda Watson past relationships, ex-girlfriends and previous hookups. Linda Watson prefers not to tell the details of marital status & divorce.

Dating is to describe a stage in a person’s life when he or she is actively pursuing romantic relationships with different people. If two unmarried celebrities are seen in public together, they are often described as “dating” which means they were seen in public together, and it is not clear whether they are merely friends, exploring a more intimate relationship, or are romantically involved.

I wandered on with a grin. I remembered that there are garages nearby, between which you rarely see a person, that's where I was going to wait for the end of the lesson. And here I am, sat down on a concrete slab and decided to read biology out of nothing to do. But it was simply impossible to read what was written there, and after looking at a few pictures, I again plunged into thought.

Through the dreams came the sound of a car pulling up.